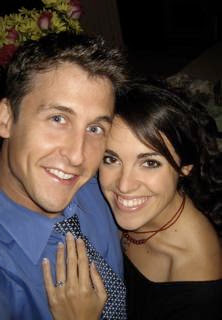 We've been married for over 10 months now (Lizzy and I, not you and I). To give you an idea of how long that is, if I was bald on our wedding day, my hair would now be over five inches long! In that time we've gone through a honeymoon phase, scrabble phase, ordering out phase, working out phase, metaphase, and prophase. Mitosis jokes! It's going to be a good year.

It was Lizzy who said to me the other night, "Handsome hero king," (she always calls me that) "why don't we start a blog?" And I did what all married guys do and said, "Yeah! That sounds great!" before I thought about it for even a femtosecond. But now that I've had time to think about it, I've gone from not sure about it to thinking it is a great idea. It is a marriage builder, and it is perfect for us, since we hate ropes courses.

So far we've only had one and a half fights over our new blog and none of them ended in a duel. I wanted to start a married blog so that I could take credit for Joel's science jokes. He insisted on labeling each blurb with "Joel:" or "Lizzy:" (see above) so I will have to think of my own. What did one Bunsen burner say to the other Bunsen burner?.............I've got nothing. Joel would surely have had a punch line for that. (Joel: "I've got gas!")

What I'm really saying in all this is welcome to our blog. Please come in and make yourself at home. Kick off your boots and lean back in the best seat by the fire while Roxie lies contentedly at your feet (Roxie is our dog, for those supposing we procreated. Also for all those supposing we have a neighbor named Roxie, thus being made uncomfortable by the former statement.) Actually, we do have a neighbor named Rocksie but as you can see, she spells her name with a cks. I made that part up. Joel is funnier than me. Mitochondria.

Posted by joelandlizzy at 6:58 PM