I was not in the saddle 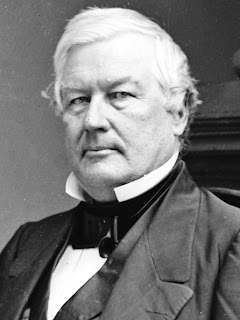 Just as an update, today was not what I thought it would be. It was a giant pile of what Ava was singing about (but not nearly as cheerful). I sat on a stool and was the official eye dropper holder for nine hours. I worked with a big shot surgeon today. I thought he would know I was ready to bring it Florida-style in the operating room. I forgot the first rule of medical training: "No one cares about your laurels, bozo. Old doctors can make you do whatever they want." So he said, "Today, I will do all the surgeries, and then you can do all the paperwork in between the cases, and also the dictations after each case." Then I said, "Hahaha!" And then he just looked at me and I realized he was serious. Then I told him he looked like Millard Fillmore and not in a good way.
You might be thinking, "I bet that bothers you a lot because you're such a big deal." And I'd like to tell you that humility is a wonderful gift if we learn to cultivate it and that I realized today that it is fulfilling to just help in even menial ways if it is for a worthy goal. I'd like to say those things, but Lizzy or Josh might write a blog and tell you all the things I really said on the phone on the way home. I used crazy, made up words that I haven't yelled since the last time I changed a tire. It was a terrible day. There have been hundreds of days like this since I started college. Going through the steps to open your own clinic is not like climbing a ladder as much as it is like standing on the bottom rung for 13 years and learning more and more, and then blinking and ending up at the top when it is done. I get to blink in nine months.
Posted by joelandlizzy at 5:30 PM