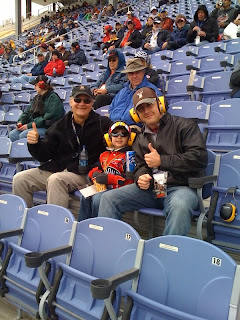 Before the race. Mom: the beverage to my right belonged to the man taking this picture.
I went to my first NASCAR race this weekend, which as I understand it, stands for National American Sports Car American Racing. My boss Dr. Durrie asked if I wanted to go to the weekend NASCAR race with him. I idolize this man. To get an idea of what it was like to be invited to spend time with him outside of work, imagine being 12 years old and being invited to hang out with the Jonas brothers (if you are a girl) or Billy Ray Cyrus' daughter (if you are a boy) or Billy Ray Cyrus (if you are a NASCAR fan).
To get ready on Saturday morning, I put on jeans and a sweat shirt and a camo hat with a deer on it. I kind of worried I would look like I was trying too hard, until I got out of the car. I honestly saw men in full camo, as if they had just climbed down out of deer stands to attend this event. Walking into the speedway, there were huge trailers, each of them dedicated to a single driver. The trailers had huge, 10-foot pictures of these drivers looking very stern, with their arms on their hips. And NASCAR drivers are very light sensitive, so they wear sunglasses in every picture. 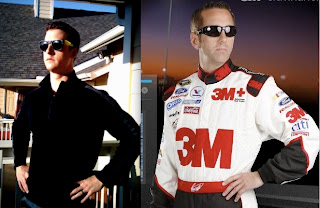 One of these is a real driver, and one is me.
The race itself was great. I sat next to Durrie for three hours. You can't really talk during the race because it is so loud that you have to wear big giant ear protectors like you would see at a shooting range. Every now and then, Durrie would tap me on the shoulder (I'd smile and wave hoping he wouldn't ask me to take off the headphones) then he'd motion for me take off the headphones (it was like getting punched in the ear by screaming engines), then he'd lean over and say what sounded like, "Bwar gaffen a stall bregner haddle!" It was too loud to have any idea what these words were supposed to be. I'd look to see if he was smiling or serious and then say "HA!" or "geez!" accordingly.
All in all, it was a fine day. Durrie and I filed out of the stands with 80,000 good people who love Jesus and love NASCAR, though not always in that order. On the drive home, he and I talked about Hunter Vision, and I was glad. Mostly because he is a better resource than anyone else I could ever find, but also because it is very possible that he was starting to think I was an idiot savant when he was sitting next to me at the race. I'd say I came out even on the day.
Posted by joelandlizzy at 6:26 AM