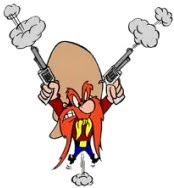 This is why Yosemite Sam never got anything done.
I got up at 5 this morning just like I was supposed to. I came to this dining room table an hour and a half ago and opened this MacBook to write a blog. The blog writing thing is supposed to gently transition me out of dead-to-the-world sleep Joel into ready-for-the-day morning Joel. But no thoughts would come to my head this morning. My brain was firing one, maybe two neurons a minute. If someone jumped out to scare me, I wouldn't have yelled and fallen out of my chair until a good two minutes afterward. Which would serve them right, because I bet that would scare them.
I think I blew myself out with yesterday's rage over sitting in an observation chair for nine hours. Rage might be a strong word, since mine is mainly cartoonish. I rarely get actually "ugly angry" except for when my sports teams are losing at their games of sports they are playing. But either way, it was a stupid way for me to expend my energy. Self-pity and/or self-righteousness (they are strikingly similar) make you both unhappy and ineffective. People should at least choose one or the other of those to be.
Finally, I watched "Private Practice" with Lizzy for the first time last night. In case you've never seen it, just imagine this line being said in a hundred different ways for an hour and you won't have missed a thing: "Don't you understand? I'm a doctor. I save people...(looks down at his hands pensively)...but I can't save her. But it's my job. I am a doctor. (takes off white coat)...But I'm a person, too. And a doctor." There, now you're all caught up.
Posted by joelandlizzy at 6:42 AM